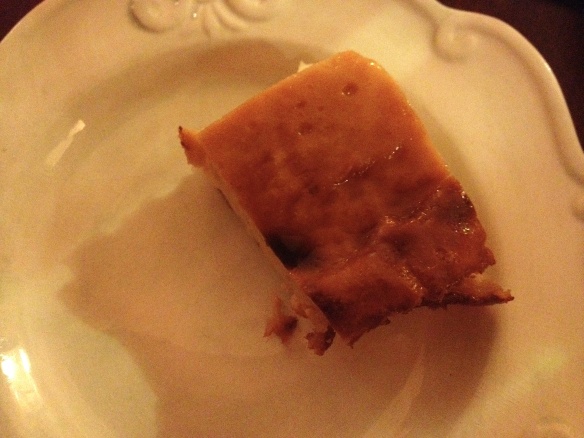 Two creative desserts were provided by Chris.  As a bonus, the first came with a nice story.  Read on:

Since many Trinidadian desserts are really sweet I picked Cassava Pone since it wasn’t too sweet and seemed very authentic and local. I think Peter or Linda may have mentioned where the word “pone” comes from but I forgot (I don’t think we did.  We don’t know what it means! According to all-knowing Wikipedia, pone is also a name for a type of cornbread in the Southern US, derived from a Native American word.  Triangle trade?) Also, we decided that tropical fruit like mangoes was needed to complete a Caribbean party, so the pone is accompanied by a mango-yogurt-white rum smoothie. Little drink umbrellas would have been the final touch but ran out of time to find some!

(pone rhymes with stone not Monet)

I found several recipes for Trinidadian style pone online. Most used cassava but several also included pumpkin. I did research to find a local Caribbean market in the Bay Area. I found great reviews about a Caribbean market: Specialty Foods, Inc. 535 8th St. in Old Town Oakland, CA. Since I work in Oakland it was a perfect field trip during my lunch break. The market was stocked with all sorts of Caribbean delicacies. I filled my basket according to my online recipe with frozen cassava, coconut, condensed milk, etc. One tip I learned is that it takes time and hard work to grate the cassava, so purchase the already grated cassava which I found in the frozen section. When I went to pay, the friendly woman at the register immediately recognized my ingredients and offered to give me her mother’s own cassava pone recipe. She introduced herself as Leilani and said that her family is Filipino and that the recipe is a little different. It has a flan style topping (I suspect that comes from the Spanish cultural influence) but that all her Caribbean friends love it! I was sold (literally). We went back into the aisles and she picked the additional ingredients that I needed. She noticed that I had picked the most expensive can of coconut milk (of course, it must be better, right?) so she traded it for a cheaper – and better! – brand.

The moral of this story is to be open and friendly like Chris.  You never know where it will lead you! Also, a recent study discussed in the New York Times showed that talking to strangers can increase your happiness.  So forget what mama told you!

2 16oz packets of frozen grated cassava (defrost out of package)

Optional spices: cinnamon, cardamom. (I used about ½ tsp of each.)

Defrost frozen grated cassava. Tip: first remove frozen cassava from package to defrost since otherwise difficult to scrape out of package when thawed.

Spray 13 x 9in baking pan with non-stick cooking spray and pour mixture into pan. Bake for approximately 50-60 minutes or until top is firm and dry.

Combine coconut milk, condensed milk and 2 eggs in a separate bowl. Blend well and set aside until cake has fully cooked, as above.

When cake is ready, pour topping mixture to cover entire top without overflowing the pan. Return to oven for 45 min or until top layer is dry, bubbly and browned. 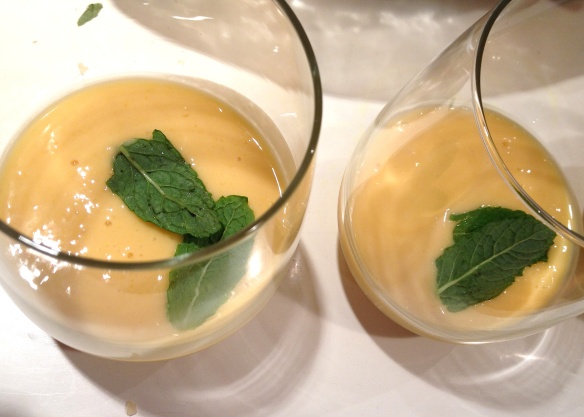 2 to 4 tablespoons simple syrup, depending on sweetness of mangoes

Combine mango, yogurt, nectar, rum and a few cups of crushed ice in a blender and blend until smooth and frothy. Sweeten with simple syrup, if needed. Divide among 4 glasses and serve.

This concludes our Spicebox Supperclub: Trini Carnival Edition.  Thanks for reading!

We’ve just had another Supperclub from a completely different corner of the world.  Check back in a few weeks to see where our latest Supperclub transported us!