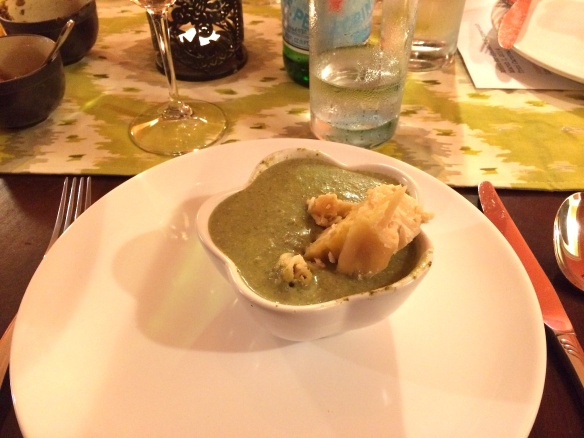 Callaloo is part of what is known as “creole food” in Trinidad, among other foods served by the descendants of those African slaves, including macaroni pie and pelau (rice with pigeon peas).   It’s eaten alongside these other foods, served with rice.

Callaloo, despite its humble origins, is as smooth as a French bisque.  True callaloo uses taro leaves, which are carried by some Asian markets.  If unavailable, whole leaf spinach makes a good substitute.  The salt pork and crab add depth of flavor but can be omitted to make a vegan version of this stew.

Accompaniment: steamed rice (in the Caribbean, parboiled rice such as Uncle Ben’s is typical) or roti

1.  Melt butter in a stock pot and then add all vegetables.  Saute until onions are fragrant and translucent.

2.  Add broth and coconut milk and bring to a boil.

4.  Simmer for 30 minutes, until all vegetables are very soft.

5.  Puree with an immersion blender or in a standard blender. (Remove salt pork first, if used.)

7.  If using crab, add to soup and bring to a boil.  Cook for a few minutes until crabmeat is cooked.

Film trivia: Bhaji, the Trinidadian name for spinach, is also part of the title of “Bhaji on the Beach” (1993), the first film by Gurinder Chadha, who later brought us “Bend It Like Beckham.”

A version of this post was published February 28, 2011 on Salon.

This is basically Trinidadian mac and cheese, baked into a casserole and sliced so that you could eat it by hand, if you wanted.  In Trindad, one way to enoy callaloo is to use it as a gravy on top of a slice of macaroni pie.  For fanciness for the Spicebox Supperclub, we’ve inverted the ratio so and used a small slice of macaroni pie as a garnish in a bowl of callaloo.

1 pound macaroni—in Trinidad this long type of macaroni is used, but you can substitue elbow macaroni if you can’t find it. We’ve found it imported from Mexico and Italian bucatini is similar.

4 oz grated cheddar, plus another 4 oz for topping. Cheddar is the most widely available cheese in Trinidad, and when Peter was growing up , the only one.  For the right taste, use Irish cheddar, preferably Kerrygold, which is now widely available here, including at Trader Joe’s and Costco.

Thanks for coming by! This is the 5th post in our series on our Trinidadian-themed meal.  Come back next week for the next course! It involves the spirit of Anya Ayoung-Chee, from  Project Runway.  Intrigued?