We left you wondering in the previous two posts, what is this yerba mate all about? Your wait is over.  This is the traditional way of beginning a meal in Argentina, a gathering of friends around a shared gourd of brewed yerba mate.  Chris and Diana brought back a large bag of prepared (cleaned, “sin palo” (“without sticks”)) yerba mate from Argentina, 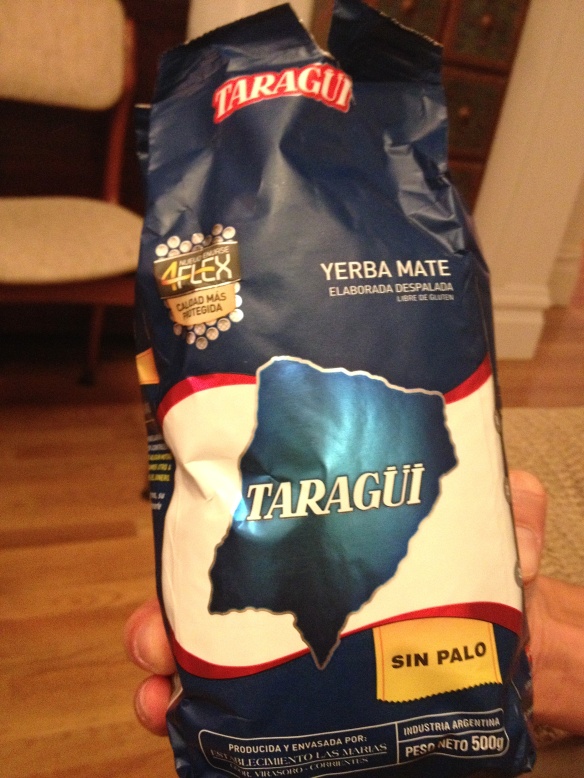 along with a beautiful ceramic gourd and a traditional stainless steel straw (bombilla), which we passed around and took sips  until the brew was too bitter. 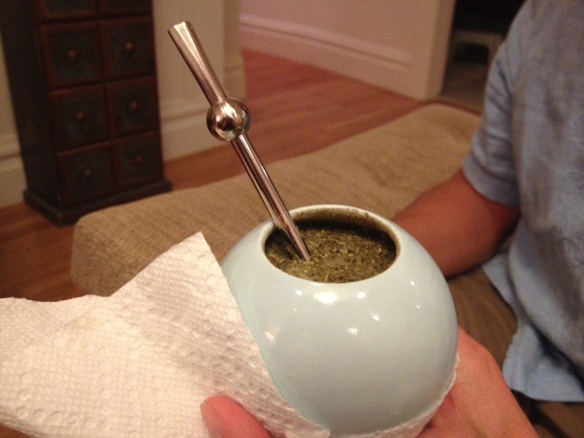 It had a pleasing, grassy, green tea-like taste, and was a nice way of centering ourselves before sitting down to dinner.

Chris did a little more research into the drinking of yerba mate and shared it with us:

Mate (pronounced mah-teh) is a drink made by steeping dried leaves from the yerba mate plant in hot water. It was the Guarani Indians of South America who first discovered the rejuvenating qualities of yerba mate and now it’s enjoyed in Uruguay, Paraguay, Argentina, parts of Brazil, Chile, eastern Bolivia, Lebanon, Syria and Turkey. It tastes somewhat like green tea, with hints of tobacco and oak.

A gourd being used for the first time should be cured, or else the first few drinks from it might be a little on the bitter side. Curing removes the soft inner tissues of the gourd and “seasons” the inside with the flavor of mate. Fill the gourd with boiling water almost to the metal rim (or to the top if there is no metal rim) and let it sit for 10 minutes. Then softly scrape the membrane out of the gourd with a metal spoon under running water (but do not remove the stem in the center). Finally, put the cleaned-out gourd in the sunlight for a day or two until it is completely dry.]

Additional info and tips (via WikiHow)

This post is part of the second Spicebox Supperclub, the Comida Porteño con Sabor Latino, celebrating the food and drink of Buenos Aires, Argentina.  Come back next week for (finally) some food– empanadas!